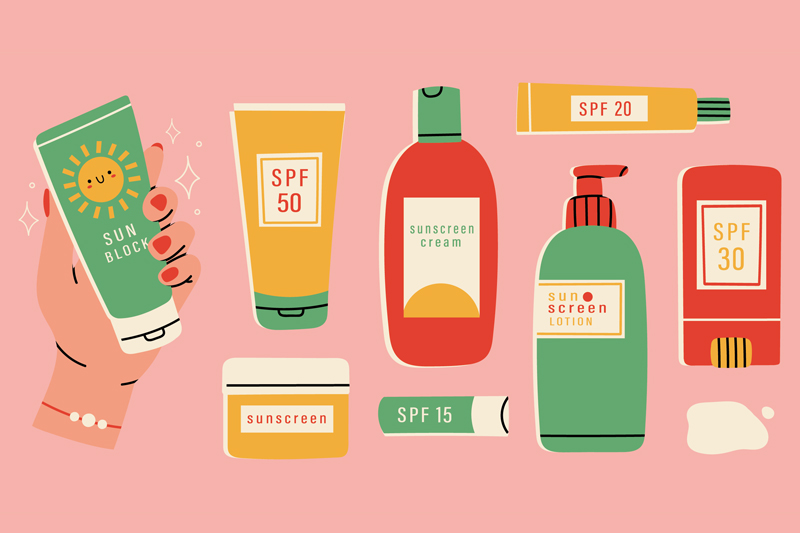 Many people think that sun protection is like a raincoat – you only put it on when you expect to need it.  While it doesn’t rain from dry air, every bit of unprotected sunlight causes damage to skin.  So waiting for a beach day to put on sunscreen leaves you exposed to a lifetime of premature aging, and perhaps even skin cancer.

To understand why solar UV is so dangerous to skin, let’s follow what happens in the minutes, hours and days following a single moment of sun exposure.  UV light is the most damaging component of the solar light spectrum that reaches the earth’s surface.  It is readily absorbed by the DNA inside every skin cell, more so than any other molecule in skin.  The DNA is like a twisted ladder inside the cell nucleus, that is responsible for directing all the cell’s functions, and dividing when it is time.  The chemical “rungs” of the ladder absorb the UV, and this causes a chemical reaction that fuses the rungs together.  This fusion distorts the structure of the DNA, interferes with its coding function, and it has to be fixed.  Sun exposure less than a sunburn can cause 100,000 fused rungs in every single cell of exposed skin!

Within seconds, special DNA repair proteins jump into action and bind to the distorted sites in the DNA.  Some of these proteins send out signals that the DNA is damaged and orders that cell functions stop.  Other DNA repair proteins attract more proteins to the site, and a process of repair starts.  The damaged rungs are cut out, and the site is patched up.  Then the repair complex moves on to the next site of damage and repairing all of the damage can take more than a day.  If there is too much damage, the cell can decide to self-destruct rather than risk turning into a cancer cell, in a process called apoptosis.  These cells eventually slough off in sheets, which we recognized as skin peeling.  Other cells are severely damaged but do not self-destruct, and these become zombie cells called senescent cells.  They fail to function as skin cells but rather continue to send out distress signals.  A few cells try to fight through the damage, but they make mistakes copying their DNA during cell division, and if these mistakes are in the wrong places, they can become skin cancer cells.

Within minutes of the UV damage, the signals released within damage cells activate major tissue repair.  One of these pathways is wound-healing, where enzymes are released to remodel the skin at the site of damage, such as by breaking down collagen.  The skin is repaired, but often not as well as it was in the beginning.  Repeated cycles of wounding and healing lead to wrinkle formation.  All this can go on without the appearance of a sunburn.

Within hours of UV exposure, the immune system is activated to respond to the tissue damage by the release of inflammatory signaling molecules called cytokines.  Free radicals are released to fight bacteria, blood vessels dilate and white blood cells rush in to clear the area of debris, often taking out healthy cells along the way.  This also goes after even low levels of sun exposure.  However, if the immune system activation is sufficiently high, we recognize it as a sunburn about 24 hours later.  If too many cytokines are released, we call it heat stroke.

DNA damage to the skin’s pigment cells, called melanocytes, induces them to make more pigment in an attempt to shield the other cells of the skin.  A few days after a single even dose of sunlight, we see a tan, and it eventually fades.  However, repeated rounds of sun exposure cause uneven pigmentation which doesn’t go away, leaving “age spots” or “sun spots” and skin discoloration.

After about 3 days, the immune system shifts from an inflammatory response to an immune suppressive response in order to allow the tissue remodeling to be completed.  Unfortunately, this also suppresses the elimination of cancer cells, which can then grow out.  In fact, skin cancer can only arise in skin which is immunosuppressed.  This happens even when there is no sunburn.

What can we do to prevent this subtle yet significant skin damage from even mild sun exposure?  Sun protection should be a regular daily habit, not just a beach day event.  This includes protective clothing, a hat and sunscreen well applied.

One traditional sun treatment product with the endorsement of mothers everywhere is aloe vera gel.  High quality aloe has a component called acemannan that calms skin and prevents an overly inflammatory response.  Unfortunately, many inexpensive aloe products are processed in a way that destroys the delicate acemannan molecule.  They are also farmed in a way that unnecessarily consumes water and scarce land resources.  Biotechnology and TheGreenCell have a new answer: All in One™.  They have cultured the stem cells of the aloe vera plant and ferment them in a reactor, which eliminates land cultivation and minimizes the use of water. All in One™ stem cell extracts prepared in this way have the maximum benefits of the aloe leaf pulp and none of the wasteful, unusable part of the plant.  The stem cell aloe extract is of consistent quality independent of climate or harvest conditions.

Laboratory and clinical studies of All in One™ aloe stem cell extract demonstrate it retains and even exceeds the best results for traditional aloe products.  It provides the soothing, smoothing and moisturizing benefits expected of the finest aloe product, but is surprisingly good at stimulating collagen production while protecting lipids and DNA from environmental assault.  Study dermatologist and consumers notice the improvements within the first week of treatment.  This next level aloe ingredient should be part of everyone’s sun protection regimen.

Make the extra effort to protect your skin from sun damage, and you’ll be rewarded with a clear and youthful look for life!

Daniel B. Yarosh, PhD is a technology advisor and expert on the convergence of science and business in skincare and dermatology. His attention is now focused on the emerging sciences in skin care, such as DNA repair and the microbiome, and neuromarketing and evolutionary biology of beauty. He advises companies on applications of biotechnology and scouts for the latest technology that can impact the beauty and skincare industries. He serves on the Board of Directors, Aceto Corp. (Nasdaq: ACET) a NY pharma company, including the Audit & Risk as well as the Compensation Committee. He retired from Estee Lauder Co. in 2016 after serving as Chief Technology Advisor.

Extensive new research shows there is a boom of interest in plant-based products – particularly cosmetics.

What is All In One™️?

TikTok buzz on Aloe Vera: is it good for you?

TAKE YOUR HAIR CARE TREATMENTS TO THE NEXT LEVEL

CONSCIOUS BEAUTY FOR A PROMISING FUTURE

SKIN HEALTH DURING THE COVID-19 PANDEMIC